Here is a picture from 1982. It is from a norwegian magazine which made an interview with me. Apart from the heading "With a computer as a playmate" the article was quite ok... It is the only good photo I have of it's original status. On the screen can be seen a basic game; dropout which came out of a computer magazine. In 1982 home computers were very rare in Norway. 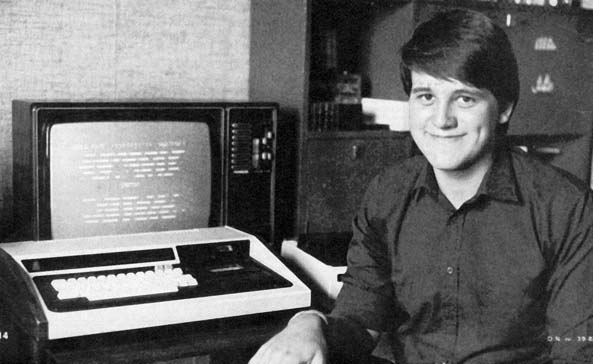 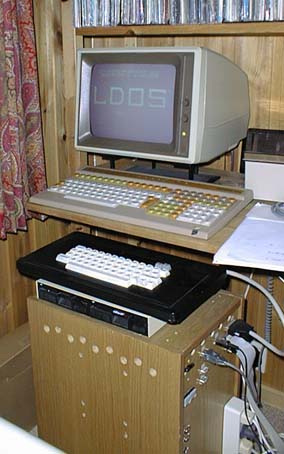 The original powersupply got problems with the load so at first I changed the transformer but realized that the 5V regulator was the problem. The expansion box was also a bit in the way with it's short cable. So I got hold of some real switch mode powersupplies but couldn't fit them in the case.

So I made a new case for it out of a wooden cabinet with a sliding door, attached some wheels, put the keyboard in a separate case with a longer lead so I could have it on a table over the computer much like a minitower pc. I attached the cards from the expansion box just folded "under" the cards from the main unit. This is how it is today as you can see from the photos.

I have later attached a keyboard from a Tandberg TDV2200 terminal. The keyboard speaks RS-422-A and I made another serialinteface for it, modified it's firmware a bit (changed some obvious tables) to send codes in a fashion I could use. I made drivers for SmalLDOS and DOSPLUS to use the new keyboard instead of the inbuilt. Some old games still use the old keyboard so it is still attached and can be pulled out when I need to use it.

The latest change was to rework the character generator to use an 8 by 12 rectangle in stead of the original 6 by 12. Doing this unfortunately also affected the hires unit so that was an ongoing project and never got finished when I bought a 386 PC with SVGA...

It is amazing how well this old computer works, old floppies and tapes work perfectly as they did 19 years ago. It is completely silent (no harddisk or fan). (The sound unit can be turned off when not needed and is generally silent without the games). The floppies are much faster than it's PC counterpart. Programs like an editor are not at all slow.

In these photos the cabinet is a bit pulled out so you can see it. It would normally be pushed in against the wall. On the screen can be seen the splash screen of LDOS which I have managed to transfer from disk images from internet.