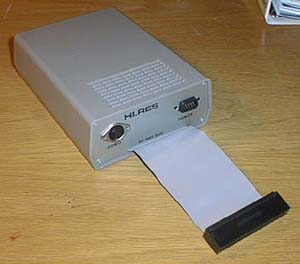 I got it early November '82, and it was great. I even got better resolution than my friend with an Apple ][. It was a kit for those with a soldering iron. It needed power from the Video Genie and also some of the video and CPU signals.

At first I used it with a TV, looping back the video out from the hires to the RF converter inside the genie. (When not using the hires I would then plug the RF video input into the genies video out.) The quality of the picture on a TV wasn't very good, this is of course due to the low bandwidth of the TV (might have been better with a B&W TV). There was a significant difference in intensity of a vertical line 1 dot wide and 2 dots wide. I did later get a 12" green monitor.

The hires would xor with the text screen and fit exactly over the text screen pixel for pixel since the 64 by 16 text screen characters used 6 by 12 becoming 384 by 192 pixels. The hires pixels were "flicker free" but didn't help the text display with the same.

The interface was slow, using I/O for addressing the video ram without any auto increment. Bunching 6 pixels in each address. Being 6 pixels per "byte" also fit a text character generator making it easy to implement reverse characters and alternate charactersets in the hires.

It came with software for extending basic (also worked with disk basic) adding:
CLR clear hires
REV reverse character (by drawing a white rectangle under the character)
PLOT modify one pixel
VECT draw a line
FILL draw a rectangle filled or empty
HOLD save a "character" into one of 256 places in extra ram
DISP display a hold'ed character and finally
VIEW read back a pixel

This software is quite optimum so the slowness lies in basic itself and the interface. The slowness of basic is something that can be amended so I would program much of the hires stuff in assembly. 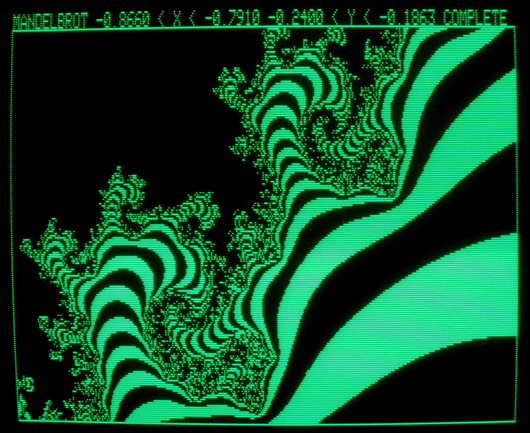 This is a recent addition to the collection, displayed on my old hires attached to my new (untampered with) Genie I. Thanks to  Jan Vanden Bossche for the original program (I did some changes). It is normal basic and using floating point (single precision) math so although I tried to speed it up this image took 3 days and nights to make (The model I is no floating point math cruncher). It could probably have been helped with a compiler basic like the higher versions of ACCEL (I will try that sometime). 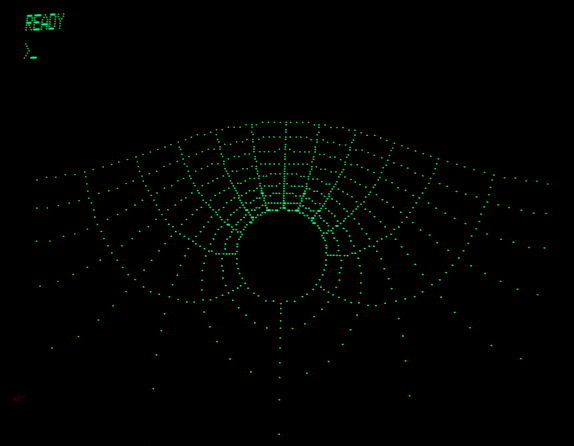 Finally my Nichols diagram, a small program from back then (1981). Well, apart from being nice this diagram is used to analyze  instability. Here is an explanation from the net: "A plot showing magnitude and phase contours of a system transfer function where the ordinate is the logarithmic loop gain and the abscissa is the loop phase angle. Used in control systems and feedback system design." I was studying to become an electronics engineer.


The best demostration would be my 3D movies on the HIRES but at the moment the only representation is made with the HT1080Z emulator. Data was created by a basic program frame by frame and then displayed with an optimized assembly program. Anyway, it is just like the real thing. If you look closely at the larger and later pt.avi you can see that updating a frame takes too long and it is noticable, this is due to the slow interface of the HIRES. (Originally my videos were many megabytes big but I remade them in 2014 with DivX codec which made them somewhat more manageble and should now open in a new tab.)