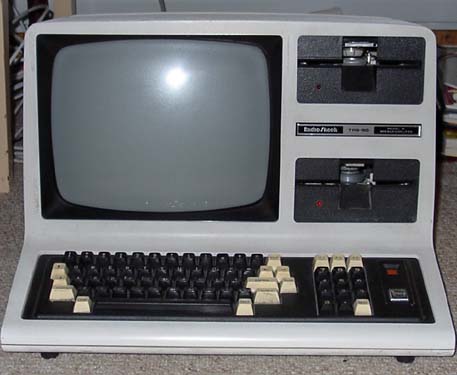 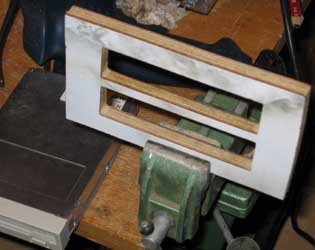 Here in the photo I have done first stage of the 3.5" project: I made the front (actually out of bathroom panel, doesn't give the exact finish but is nice).

I didn't want to modify the floppy interface so to get the top drive to be :2 I had to make a floppy cable for it that went all the way to the bottom edgeconnector.

The machine didn't have hires, it was a thing I really wanted to add. So through eBay, from Computer News 80, I got a Micro Labs Grafyx Solution card. See image below.

I have been using it with several operating systems. LS-DOS, DOSPLUS, TRSDOS 6.1, Montezuma CP/M and CP/M Plus. Actually mostly DOSPLUS since the differences to Model I in operating and installing seemed to me to be small. Now also RAPIDOS because of the Micro Labs hires card.

I have also been using it in model III mode. It was convenient when transferring old floppies to 3.5" (and from there to PC virtual disks) when there were problems in the real Model III's drive.

It came with some Model 4 software which have all been transferred and is now to be found on www.trs-80.com. 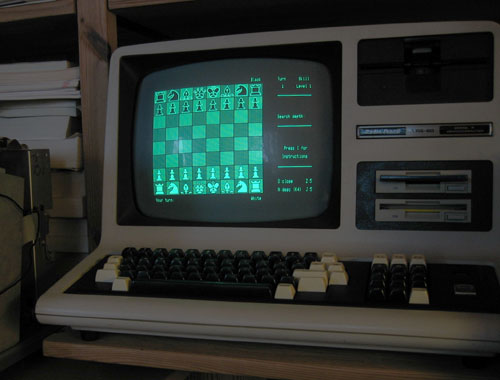 Here it is displaying the opening position of the chess game from the Micro Labs hires games floppy. You can also see the finished 3.5" floppy module.

This machine, like the first Model I and the Model III was given to me by Graeme Draper. Thank You Graeme.