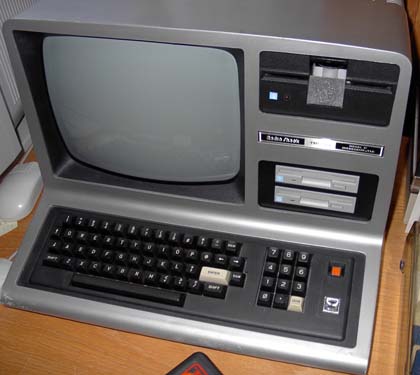 My TRS-80 model III. It has 48K RAM. It came originally with 2 internal SS40 floppy drives. The one that was :0 works faily well and is now mounted as :2. The one that was :1 is bad (stored for later). It also had several keys that needed cleaning inside.

The keys all became good after cleaning. Some of them had to be desoldered to get at the catches which opened them for cleaning, and soldered in again afterwards. 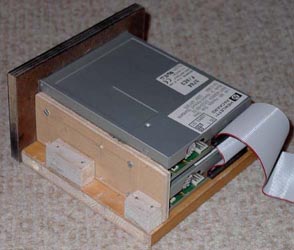 I use the 3.5" drives with 720KB media, 2DD floppies (1.44MB is not possible, the 2MHz Z80 isn't fast enough to cope and there is no hardware to handle selecting high density).

It is also possible to use 1.44MB media as 720KB by covering the right hand hole with opaque tape underneath. The 1.44MB media actually needs a slightly different setup when writing (normally handled by selecting high density) but the difference is so small that it generally works. If you have 720KB media use it.

This machine was equipped with one modification from before: A joystick port. There is a 9pin dsub connetor coming out on the left side next to the keyboard. It is connected to the keyboard so that the switches in a Commodore 64 compatible joystick parallels the arrows and space. It is very similar to what Simon N Goodwin describes for the Video Genie in the page that I host.

This machine, like the Model I and 4 was given to me from Graeme Draper. Thank You Graeme.