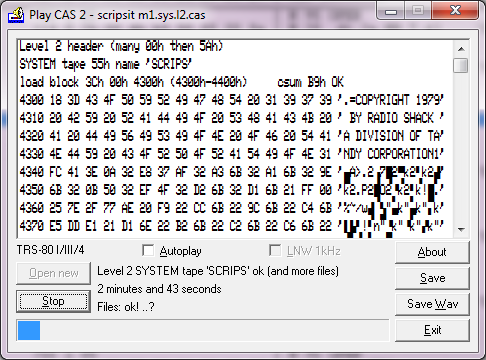 Main use:
Connect your TRS-80 cassette input to your PC soundcard. If you have the standard TRS-80 cable plug the plug that normally goes into the 'Ear' output of a CCR-8x into the PC's headphones output. Then use Play CAS to playback emulator CAS files on the PC side while you CLOAD etc. on the TRS-80 side.

Installation:
There is no automatic installation so you need to extract Play CAS and put it somewhere on your harddisk for example C:\Program Files and create references to it (Desktop icon, Quick launch and/or start menu). Shouldn't be too tricky. It will work on Win95 or later and will use the soundcard through the windows drivers.

There is, included, a truetype font which you can install if you like. TRS-80.TTF - it is the TRS-80 characterset as it is found on a Model I including the block graphics (it has arrows instead of square brackets). Play CAS detects the presence of the font and uses it if it is there. To install the font extract it. Then go to Fonts in the Control Panel and Install New Font... (in later windows doubleclick the ttf file in explorer and confirm install) it is named 'TRS-80'. With the hyphen it will not conflict with previous TRS-80 fonts. The font is adjusted for aspect so it will not match pixel by pixel however it is used (unless you have a 384 by 192 compatible graphics mode). It definitely looks better with font smoothing. For some reason it looks best if set to 18 pixels height (not an option in editors etc.). Look at the screenshot above to see how it looks (96 dpi). Play CAS will use the default monospaced font if TRS-80 font is not found.

Autoplay:
If you enable Autoplay an opened file will start playing immediately. Autoplay can only be enabled in the dialogbox.

CAS format files:
CAS file format is an efficient binary representation of cassette contents used by emulators. Not all emulators use the CAS file format for Model III highspeed but here Play CAS can help as it can save wav (options menu).

CAS file format does unfortunately not represent pauses thus if a software requires pauses that was on the original tape Play CAS can't provide them.

Play CAS checks the CAS and to determine what type it is out of the 3 types available; Level 1, Level 2 and Highspeed. If this can't be determined you will be asked. Unfortunately we have to put the limit somewhere and Play CAS requires the headers to be at least 17 bytes (ROM requires 2 for Level 1 and 2 and 25 for highspeed). 16 00's and A5 or 16 55's and 7F.

Analysis:
Play CAS is now better than ACAS at analyzing CAS files. Saving text is found in the options menu (see below).

Special case Level 1 CSAVE with no program "BIOS quirk" is detected but can't be played, only saved as text. (Use a hex editor if you want to save a binary version.)

Anything else is considered "bad" and assumed to be data. It is of course not possible to do any error checking as we know nothing about the rules that apply.

Unfortunately Scripsit save files and Level 2 basic saved as ASCII are still on the wish list. They will be reported as bad but if they look ok they will probably load perfectly.

Multiple "files" in one CAS:
Is handled but have to be same type. No pause is inserted between "files". Play CAS will ask you if a conflict or ambiguity arise. As there is no pause concept in the CAS format it would be better to split such CAS files up. Some commercial programs employ own loaders (Kansas and Micro-Ware), here the loader is started automatically and loading of the data commence directly making it perfectly ok to keep both parts in the same CAS file (the data part will be reported as bad because it is not recognized).

Other output:
Play CAS does have some extra items in the options menu obtainable by left-clicking the little icon in the taskbar or right-clicking in the taskbar of Play CAS. Save text means to save what is in the listing window to a textfile. Save wav saves the audio output as a wav. Note that text will be in PC format so for a TRS-80 to understand it some conversion is needed.

Explanation of the short status given for each "file" inside the CAS:

Please remember that a badly disturbed file might be wrongly detected

Old Play CAS unfortunately had a bug of type copy-paste. It could not load read-only cas files. Easy bugfix. This lead to me making a new vesion also changing the user interface a little and adding a feature. The save features was kind of hidden so adding a few buttons for this and removing my entries from the option menu.

Save text saves the anaysis content and may be used to detokenize basic for example or recover the source code for edtasm stuff.

Save wav saves the prepared wav based on your load (storing programs as wav is not efficient but might be convenient. This wav is kind of perfectly formed and better than anything from real cassette.

LNW 1kHz (new feature in 2.0) whenever enabled modifies the wav to go at double speed. So any TRS-80 with zip kit etc. at double speed can now load cassette without dropping to regular speed.

There are no warranties of any kind! You use or don't use this software at your own risk.

I removed the old versions. v1.1 may in Win7/Vista playing the wav stop short some milliseconds. Neither v1.1 nor v1.2 can read read-only files. v2.0 is the current version per 13/4-18 use this version.

To my Video Genie page