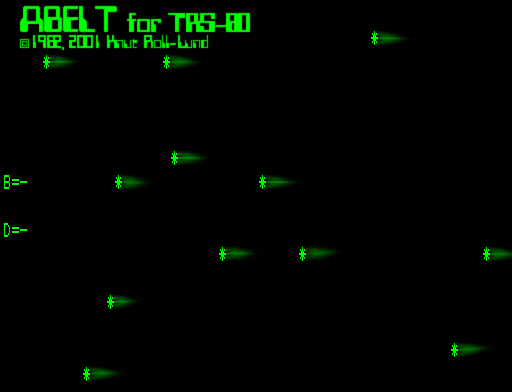 ABELT or "Asteroid Belt" is a game I made back in 1982. It is a two player game where the objective is to avoid the asteroids longer than the opponent. This could be quite dreary but here it is so that the ships can't pass each other and can't push the other away either. When the opponent moves you move after and in a while you have him/her cornered against the the edge of the screen.

Example: If you look at the picture above, B has an asteroid aiming for him/her. B should try to get down but there comes D, Let's say D wins so B must move up instead. After the asteroid has passed both player try to get into the space after it. If D succeeds also with this B must be prepared to move up again because of the next asteroid...

If both players press their buttons or moves their joysticks at exactly the same time there is a standoff no one wins and both stay put.

The game had considerable noncommercial success, many people have played the game and liked it. In Norway we have compulsory military service and I brought my computer when I was sent to northern Norway, with nothing much to do in the evenings the computer was a relief. We even had ABELT tournaments.

The game has no sound. I was tempted to add some now (when I fixed a bug and added keys to fit PC keyboard layout) but managed to resist. In a way its a bit spartan, character based and no sound, but I hope some of you will try the game anyway. Being a two player game is also a drawback.

Download: The game itself (CMD/CAS for model I and III)    The source (ASM for Misosys EDAS)

Since the game is for a TRS-80 you need such a machine or an emulator. The CMD is a disk file, you need a system with diskdrives (and expansion interface) and a DOS to use this. Any DOS would do. The game doesn't require disk so there is also a CAS file. The CAS file is a binary representation of a tape, byte by byte. You need an emulator to convert this onto a real cassette. Break can't be used to terminate the game in the tape version (it just locks up) use reset instead.