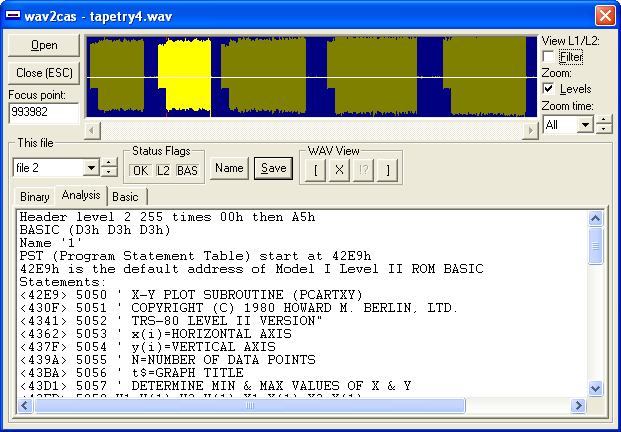 My aim was to make a tool that was better than the original and yes, now I think it is.

What wav2cas does is quite obvious, it takes a windows wav file (made from a model I level2 500baud, level1 250baud or model III highspeed 1500 baud cassette tapes) and generates a cas file for use by TRS-80 emulators or just for storage as a cas can be converted back to audio any time.

Note: Highspeed cas files are presently not supported by all emulators.

wav2cas will now autodetect which format each "file" has.

The old programs wav2cas_l1, wav2cas_l2 and wav2cas_h can still be downloaded. Although they are command line tools they are windows programs and requires win95 or up.

Installing either wav2cas: Unzip the executable and make a shortcut on your desktop to wherever you find place to store it. This is convenient because you can use drag'n'drop, dropping the wav file onto the wav2cas desktop shortcut (icon).

What you do is to connect a cassette player to your pc, record a wav file of the data and run this file through either wav2cas.

wav file format:
Windows, whatever number of channels, bytes per sample and number of channels but with no compression. If you have a mono player I recommend 44100, 16bit, mono or if you only have a stereo player 44100, 16bit, stereo. It seems that left with the lesser choice of using a stereo player using both channels are better. wav2cas will make do with whatever and combine stereo for the best result.

wav file preparation:
wav2cas has a sound level autodetection scheme which works quite well, though if it is recorded too loud clipping might have occurred and created ringing so too loud should be avoided. On the cassette player you will have the choise of using either the headphones output or line-out and on the pc you can use either the microphone or line-in input. Experiment to find ot what is best for you. wav2cas now has a display so you can zoom in and look at the signal, uncheck zoom level to see the true level.

cas file format:
Binary representation of the bit's detected, straight byte by byte, same way that the TRS-80 reads them. For highspeed this includes the startbit for each byte which is used in the data part after the header. This is why a highspeed cas is not "readable". In cas format Level 1 and 2 has the same header but basic and machine code programs are stored differently so they are not "compatible".

TRS-80 tape types:
wav2cas can take all "straight" tapes, like system, basic, data, edtasm tapes. There are some "copy-protected" tapes, where a loader is used, which will read in the rest of the data with its own loader wav2cas can only deal with this if the timing is the same as standard (ROM functions are used). Note that if there is a gap between the loader and the "data" wav2cas might split them in two entries for "files" but they can then be combined in the save options by selecting to save both at once. Note that such a "data" file will allways be seen as "bad" because the format is not known.

Multiple "files" in one wav:
wav2cas will work with only one wav at a time but this wav can contain as many programs as there is. Detection will deal with each entry separately so volume might even be different as well as formats.

The source is included for the old versions l1 and l2 wav2cas. The c file is written in such a way that it can be easily converted to a traditional argc,argv style dos etc. program. Not a typical windows program. wav2cas v2 is still under construction so I will not provide the source for download yet.

The source code that is provided is free for personal use. I claim copyright for them but you are welcome to use it as you like, provided that the relation to my program and my copyright is stated. Any commercial exploitation requires my written permission.

There are no warranties of any kind! You use or don't use these softwares at your own risk.

wav2cas v2
reads level 1 and 2 as well as highspeed
now handles wavs with multiple "files"
let you see the wav, and helps you to zoom in on problems


highlow is a small utility for converting cas files between highspeed and lowspeed. It can convert both ways and does so automatically.

It can't handle multiple files in a cas so only single file cas and it must detect the header so it can't deal with fragments.

ACAS is another small utility, this time for checking the cas files. Actually it is a beta as it will be incorporated in another program but I decided that I would release this standalone version anyway. As it is now it will scan through a cas file and find out what it can about it and output what it thinks to a txt file with the same path and name.

ACAS will read model I and III type of CAS files, it will attempt to decode the first program it finds, if there are data after what it perceives as a program these will be listed as hexcodes. For highspeed it will check that the startbit is ok. It does SYSTEM tapes, reporting the blocks, does the checksum, looks for gaps. It does BASIC, listing the program detokenizing all except what is in quotes or behind a REM, checks the embedded addresses, reports any codes in quotes or behind REM.

I would have wanted a syntax check of BASIC too, those that will land you directly in edit mode on running the program, but this is probably a dream only. If you have anything that might help with this coming true please contact me.

A windows version with MMI is on the way but has not been worked on for quite a while. It is planned to be able to do conversions too.

To my Video Genie page