The EI, cause of much joy and grief. 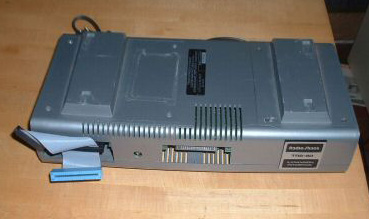 It can also contain RAM (extra 16K or 32K), a double density kit and/or an RS-232 interface. If you are lucky there is a powersupply block inside it too (Really lucky if there are two). Original lids for the unused openings are also rare.

This unit is probably the main reason why the TRS-80 was perceived as flaky. In some cases (some EI's) the arrangement with RAM and sensitive high frequency signals over the ribbon cable resulted in random resets. Bad contact in edgeconnetors had similar results. The RAM issue was addressed at first with a "buffered cable mod" and later the second revision or version of the EI. The tin plated edgeconnectors are in retrospect perceived as a cheap bad solutions but it was common at the time. There were 3rd party solutions using gold plated connectors. 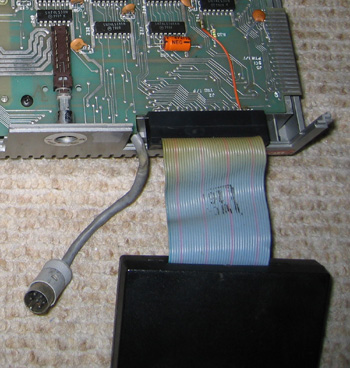 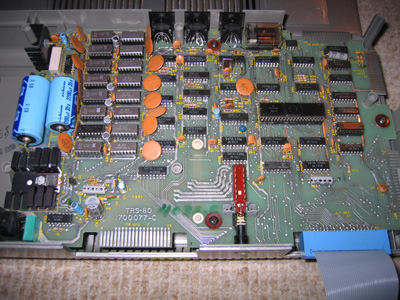 Two older EI's, one with the buffered cable mod and one without. The orange lead is the modification that makes it so that a normal ribbon cable must not be used with this EI. The cable with the DIN plug is a shielded cable and carries the RAS*, CAS* and MUX* signals. The older EI has rows of RAM going front to back and the big capacitors are not near any openings. 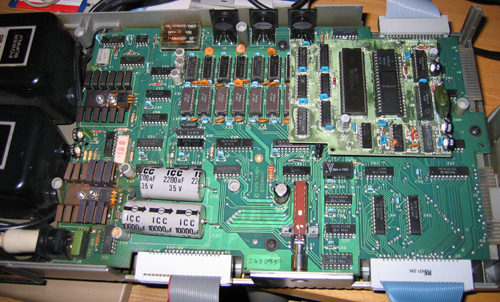 Here is a newer EI with the Tandy DD kit and powersupplies. Notice rows of RAM going side to side and the big capacitors next to the RS-232 ('Expansion port') connector opening. 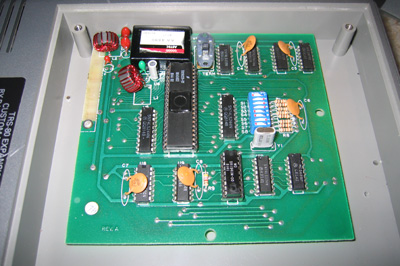 The EI has a compartment on the top, left side, where an RS-232 card can be present ('Expansion Board'). The lid is secured with 4 screws. 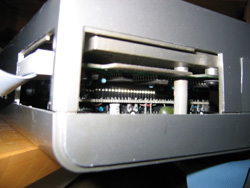 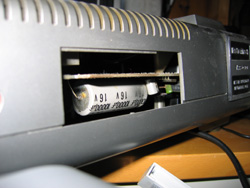 DD kits gave double density capability to the Model I. If you used a DD capable DOS you could increase diskette capacity by 80%. The fist DD kit came from Percom. Soon after many companies, small and big, made DD kits. Tandy also made a DD kit which had to be installed by them. Tandy didn't make their card compatible so two standards exist for the DD interface: Tandy and everyone else. Not a big difference, so if if your DD capable DOS didn't support both you could patch it to do either.

Pascal Holdry has recreated some DD kits and provided files so we can do the same PercomIIA, LNW80_3-5-8 or Aerocomp. Note that some components are not easy to find any more.

The powersupply for the EI is the same as the block the model I uses. There is room for two such blocks in the EI, one for the EI and one for the model I. The EI is so designed that the original monitor will fit exactly on top of it.