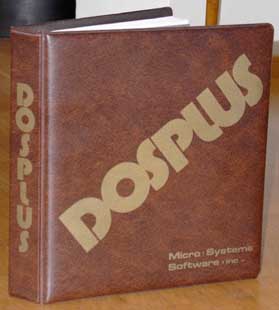 This is my favorite DOS! It was my second DOS. I first bought Smal-LDOS, which is a scaled down version of LDOS 5.1.3, and when I expanded my EI with Double Density I wanted a DOS that could do DD. The choice at the time was LDOS 5.1.3 or DOSPLUS 3.5. DOSPLUS 3.5 was newest and on the recommendation from the shop (which sold me the DD kit) I bought it.

I actually did get Smal-LDOS to work with DD, just not to boot on a DD floppy (there wasn't the SOLE command that came with the full LDOS) but the drivers were included. So I used both dos'es and the incompatibilities between them was very annoying. Actually for the most part I have found that it is LDOS that is incompatible, doing things differently from other DOSs (on Model I).

DOSPLUS is natively DD it doesn't need a driver. It does Percom type DD kit as the default, if you have the Tandy DD then you need to patch DOSPLUS with the included patch for this. You install the patch once and can then forget about it. Actually, as far as I know, all non Tandy kits are Percom compatible.

What impress me most is the manual. It is really thorough, with relevant filter and driver source code examples. It is also well organized.

Another bonus I have found lately, after I also got a Model 4, is that the DOSPLUS IV is easy to set up and use with then knowledge from Model I's DOSPLUS even when I have no manual for this version. (I'm comparing with LS-DOS in relation to LDOS, even with the manual).

Although DOSPLUS is operating very much like LDOS the one major difference is in how a file size is calculated from the directory entry, so writing onto the other dos's floppy would result in either a too short or a too long file. DOSPLUS uses the same way to calculate as does TRSDOS and NEWDOS but here there are other incompatibilities.

DOSPLUS was supplied with many patches for utilities you would buy from thirdparty, also sometimes utilities would come with patches too, like Misosys EDAS.

Well this page is meant to contain more technical stuff for DOSPLUS, here is the first: