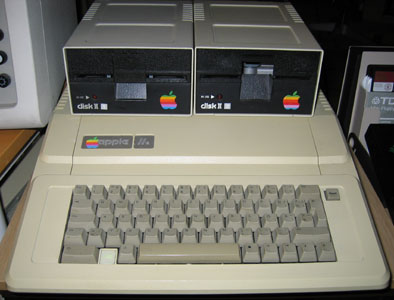 This is my Apple2
It is an "Apple //e Enhanced" originally German, hence the funny keyboard. The //e is equipped with inbuilt lowercase and 64K of RAM and after I upgraded it with an Enhanced motherboard it has a 65C02 and the latest ROMs.
It has Slot 2: Super Serial Card Slot 6: Disk ][ Interface Card with 2 Disk ]['s attached Aux Slot: A//e Ext.80Col/RGB.
Soon I should also have a SuperDrive Controller card and SuperDrive and a Mouse interface and mouse.

So, why did I buy this in January 2005?
It started with Wizardry (#1) found on virtual disk images on the net and an emulator that could run these (spring 2004). I played Wizardry on the emulator and reminisced when I played Wizardry with a friend on his Apple ][ computer back in '81/'82. I envied him that computer then. I had only a diskless Video Genie (wonderful computer that too but...). So I first bought Wizardry, then the Apple //e.

Still one can't do much with just an Apple, so I bought a Super Serial Card for using with ADT, and two Disk ]['s with interface card. I later bought a 3rd Disk ][ because one of the first two was not so good. I also bought an 80 col card for the Aux slot.

So I was set for using it, playing Wizardry and also some other classic games, arcade. At first I used it with a monochrome monitor, which I think was very typical. But the Apple had colors. I wanted to utilize these colors but found that the PAL output was not nice, it worked but had bandwidth problems and nasty fringes and seeping of colors. I didn't like it.

Then I found that there were an RGB card for the //e and bought myself one of those. I knew from beforehand that it was not possible to get the correct monitor for this card but I had high hopes that I could use one of the older monitors I had. Here started a lot of problems. None of these monitors worked with the RGB card. I could almost get a CGA monitor to work but it wouldn't sync. I checked the real CGA signal and found that it is 60Hz (the PAL output is 50Hz) and yes there is a way to get 60Hz out of the Apple too; to use NTSC timing. For me the easiest way was to buy an American motherboard and I could at the same time buy an Enhanced one. Then the CGA 5153 monitor worked with the interface I had made. This interface equipped an LM1881 to create a VSync and a 74LS04 to make both HSync and VSync positive. Then comes the next problem, the colors are mixed up, the CGA colors doesn't correspond to the NTSC/PAL colors. Well I could remedy that to a point too by switching the colors around a bit. I created a GAL16V8 (used as PAL16L8) to do this, substituting the RGBI signals to a better match of colors. 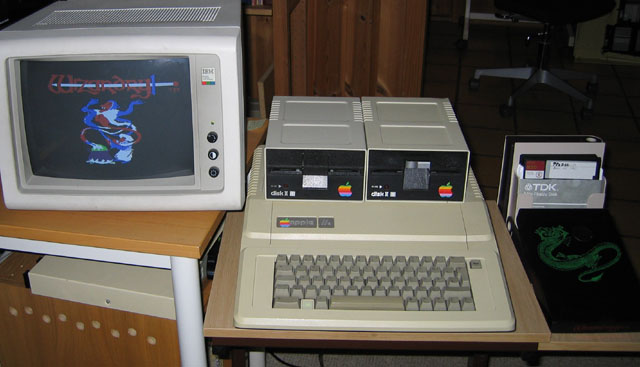 Well, is the RGB card doing anything better than NTSC. Here is an example NTSC grabbed with a frame grabber and the CGA screen photographed with a digital camera. The text is from Wizardry in Gilgamesh Tavern it is a very narrow font just like 80col but with 40col spacing. so it is hard to read on NTSC. 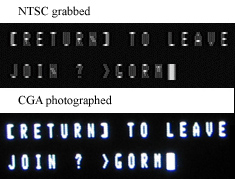 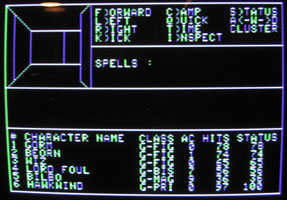 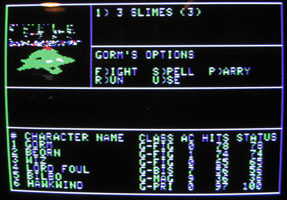 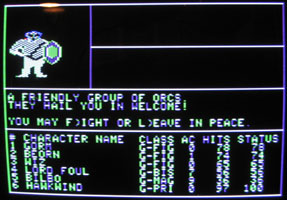 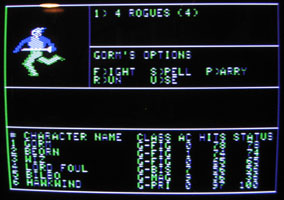 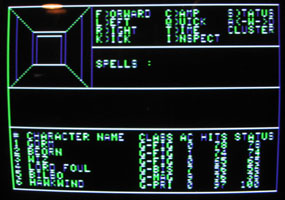 As you can se the IIe RGB output has its drawbacks too. Characters in graphic modes tend to get colors. Programs that use DHGR and are unaware of this RGB card will typically display in monochrome bitmap mode. We have found ways around this so you get DHGR colors anyway but the text also is in color and the 16 color resolution making it less readable. (I will get back here with more information about this trick when the problem is fully understood.)